Preparing smoothies requires effort. And if you’re going to make that effort, then you need a high-end and efficient blender. Vitamix is a manufacturer that understands this quite well. Their high-tech blenders are proof of that fact. No wonder the comparison of Vitamix 7500 vs. 750 vs. 5200 vs. 5300 is so popular.

They produce some of the best blenders currently available. After all, the brand has been in business for over a decade now. And made its mark! One great blender after another just keeps coming up, which is fantastic. But this also gives rise to confusion over which Vitamix creation you should buy, right?

In the light of the matter, I have compared the company’s four highest-rated models. So let’s get on with it? Let the Battle of Vitamix Blenders begin!

These two are Vitamix Next Generation blenders, no doubt. I’m talking about the Vitamix 7500 Professional-Grade Blender. And the Vitamix Professional Series 750 Blender. Both offer exceptional functionality and power. They come with a powerful 2.2-horsepower motor. Along with a high spinning capacity of 37,000 rotations per minute!

The Vitamix 7500 and 750 feature four-inch broad laser-cut blades of stainless steel. It’s this particular component that makes both the professional-grade blenders so efficient.

What’s also common is the low-profile. This means they fit under any kitchen cabinet quite easily.

Now it’s time for me to present the ultimate comparison of Vitamix 7500 vs. 750.

This is the most significant difference between the Vitamix 7500 vs. 750. The latter comes with a basic control panel. This control panel features a left-positioned pulse toggle. And a center-placed controls dial to for variable speed. The dial allows you to change blade speed. So you can achieve different types of textures.

Using the dial of the Vitamix 750 is very easy. Plus, feel free to rotate the thing whenever you like during blending. This gives you full control when the blending action is going on.

What’s also worth noting is the model’s pulse toggle. It has the ability to layer chunks over purees. In short, you can spruce up thick soups and salsas with this pulse function.

Then there are five preset programs too. These settings make room for preparing different consistencies. Like frozen desserts, hot soups, purees, and smoothies. They also make way for self-cleaning. Isn’t that amazing!

These clearly-marked presets are located next to the blender’s control dial. This invites convenience if you’re in a rush or have a poor memory. The pre-installed settings take their cue from blade resistance and a microprocessor. To adjust the speed accordingly!

As for the Vitamix 7500, it ranks as the inferior model. Nevertheless, it comes with the speed control feature. Rotating the dial at any given point is also quite possible. So you can control your smoothie’s consistency and texture. Smoothie, batter, puree, or soup for that matter!

The motor of both machines delivers 2.2 horsepower. And there are the four-inch blades of stainless steel present in both. The blending power is also pretty much the same. This includes kneading, crushing, grinding, and chopping ingredients.

The diameter of the 7500 and 750 is 10 centimeters. That means wider and longer than the other currently available blenders.

It doesn’t matter if you’re using the highest speed; both blenders are 40% quieter. Plus, they don’t overheat either. Thanks to the inclusion of thermal protection and cooling technology.

Both the Vitamix 7500 and 750 are packed with a very convenient cleaning preset.

A higher horsepower adds more torque to the blender. Combine this with the integrated cooling fan and larger blades of the 5300 unit. And you gain access to extra efficiency.

But in terms of blending, the performance is no different. I mean both the 5200 and 5300 produce similar results. Only the latter has the capacity to create more consistent soups and smoothies. It’s because of the additional 0.2 horsepower, larger blades, and a wider base.

It’s only logical to expect the Vitamix 5300 blender to be slightly louder. As compared to the 5200 model! That’s the downside of the extra horsepower of the motor I guess.

All C-Series Vitamix blenders come with containers incompatible with one another. The Vitamix 5200 is outfitted with the traditional container. While the 5300 blender features a low profile.

You don’t take time to notice that the 5200 has a smaller base. So it can hold only small ingredients. As for the 5300, the base is broader for larger batches. That means you can use this particular blender for producing multiple servings. So you know what to buy if you have a large family.

The container design, as well as size, affects storage space. Am I right? In that case, you might appreciate the low profile (17.5 inches) of the Vitamix 5300 blender. Cause it can fit under any kitchen cabinet. Unlike the 5200 that has a height of 20 inches.

If there’s any common feature in this department, it’s the tamper. For evenly crushing and adding ingredients!

Also important to note here is the spill-proof lid of both the 5200 and 5300 blenders. The lid is two-part vented with a twistable, removable plug. This is very useful when you want to add ingredients. And not make a mess at the same time. 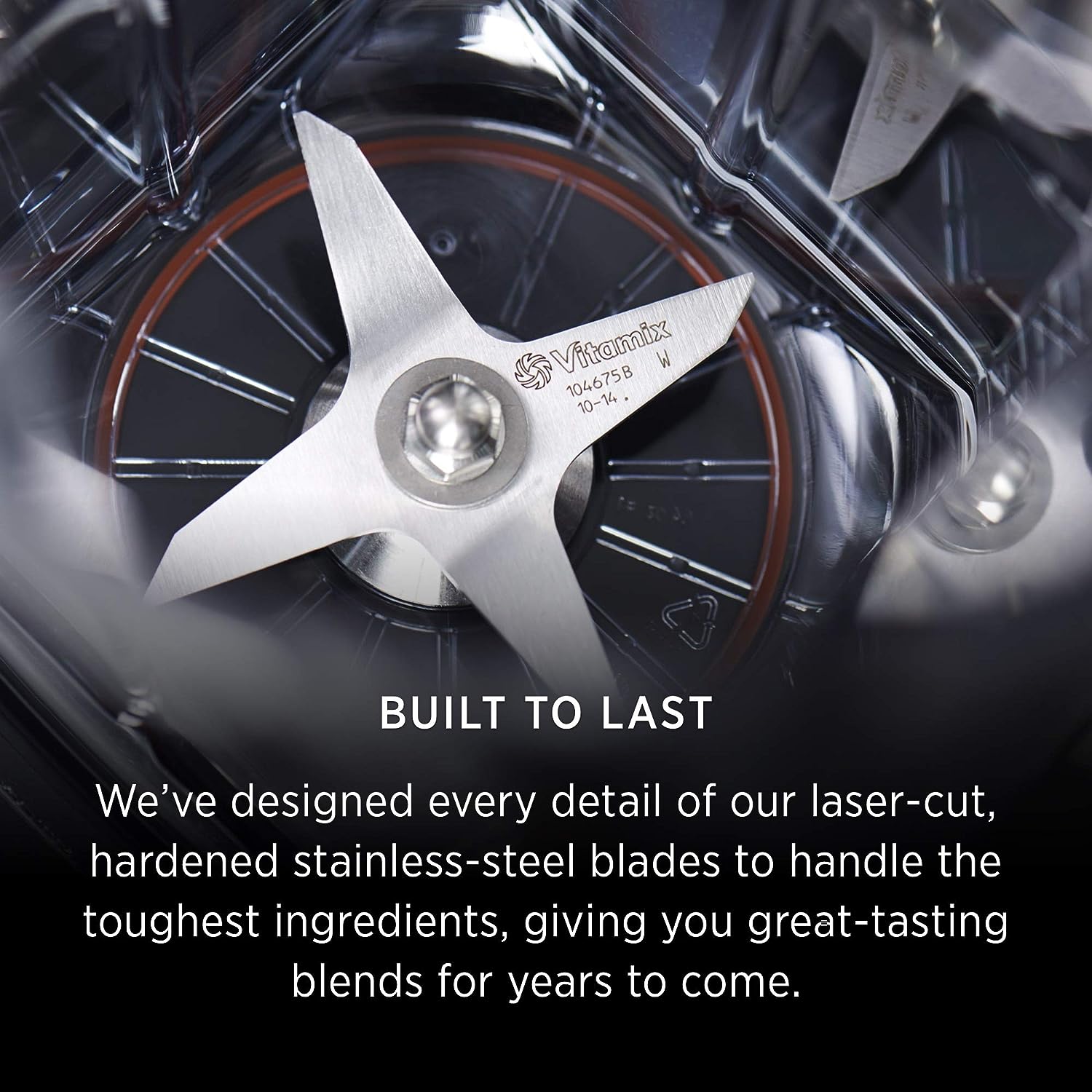 Laser-cut, hardened stainless steel material blades are a part of both blenders. The blades are tough enough to cut through ingredients consistently. Thanks to the presence of brute motors in both the machines.

However, the difference here is the diameter of the blades. The Vitamix 5200 blades have a 3-inch diameter. While the blade diameter of the 5300 blender is four inches. This means the latter offers larger cutting space. And that, in turn, deliver more efficiency.

In this department, the Vitamix 5200 is a better option. Cause it’s comparatively easier to manipulate and use.

On and off toggle and 10-level speed knob are installed in both the machines. The speed control feature makes controlling the blending action very much possible. On top of that, variable speed means you can cut larger chunks without a worry.

The only drawback of the Vitamix 5200 here is the absence of pulse function. It’s a feature that only the 5300 blender offers, on the left side.

The Vitamix 5300 is more convenient to clean. Due to its wider base of course!

But you’ll be glad to know that both blenders have the self-cleaning feature.

The integrated cooling fans are a part of both machines. So they don’t overheat, which increases durability.

Even so, the Vitamix 5300 has a longer shelf life. Cause it’s also equipped with thermal protection.

If you want to buy a simple blender, then the comparison of Vitamix 5200 vs. 7500 is an important one.

The Vitamix 7500 has a 2.2-horsepower motor. As for the Vitamix 5200, its motor offers 2 horsepower. The additional 0.2 horsepower does matter when it comes to blending tough items. And also when you want to achieve a smoother texture!

On top of that, the 7500 features an integrated cooling system. This means no overheating concerns to deal with. At the same time, you don’t need to worry about overloading or even over-working the motor. When mixing the dough and preparing hot soups!

How to Make Pizza Dough in a Vitamix

The container capacity is 64 ounces in both cases. But the container of the Vitamix 7500 blender is shorter and wider. The latter gives you more blade room. And the former makes storage easier.

It’s only logical to assume that the newer model features better technology. In the form of vibration dampening! This is what counts in the comparison of the Vitamix 5200 vs. 7500. So the 5200 unit is relatively nosier than its 7500 counterparts.

The important pulse function is missing in the Vitamix 5200. This means the 7500 blender is more suitable for preparing salsas, dips, and smoothies.

There are many similarities between the two blenders. The Vitamix Professional-Grade 5300 Blender comes with a 64-ounce container. And so does the Vitamix 7500 Professional-Grade Blender. The speed controls are also the same. 10 different settings for blending the way you like. (Blending vs. Juicing: What is Better?)

Regarding counter space, Vitamix 5300 and 7500 have a low profile. Along with wide, wet bottom to store conveniently. The 2.2-horsepower motor can handle tough jobs. And lastly, the blade diameter is four inches in both machines.

Vitamix Next Generation (G-Series) blenders are 40 percent quieter. This means the Vitamix 7500 is not as loud as its older C-Series sibling.

It’s common sense to assume that blenders generate heat. In that case, which model is safer to use? Let me tell you that both the 5300 and 7500 blenders feature air vents. But the latter has larger vents. Meaning it can keep the power-consuming motor cool for a longer time.

On top of that, the Vitamix 7500 is packed with thermal protection and cooling fan as well. Disappointingly, there’s no such thing installed in the 5300 blender.

Both the units are armed with the convenient self-cleaning feature.

But very important to note here is that only one model is dishwasher-friendly. And, surprisingly, that’s the Vitamix 5300. This means it’s easier and quicker to clean. 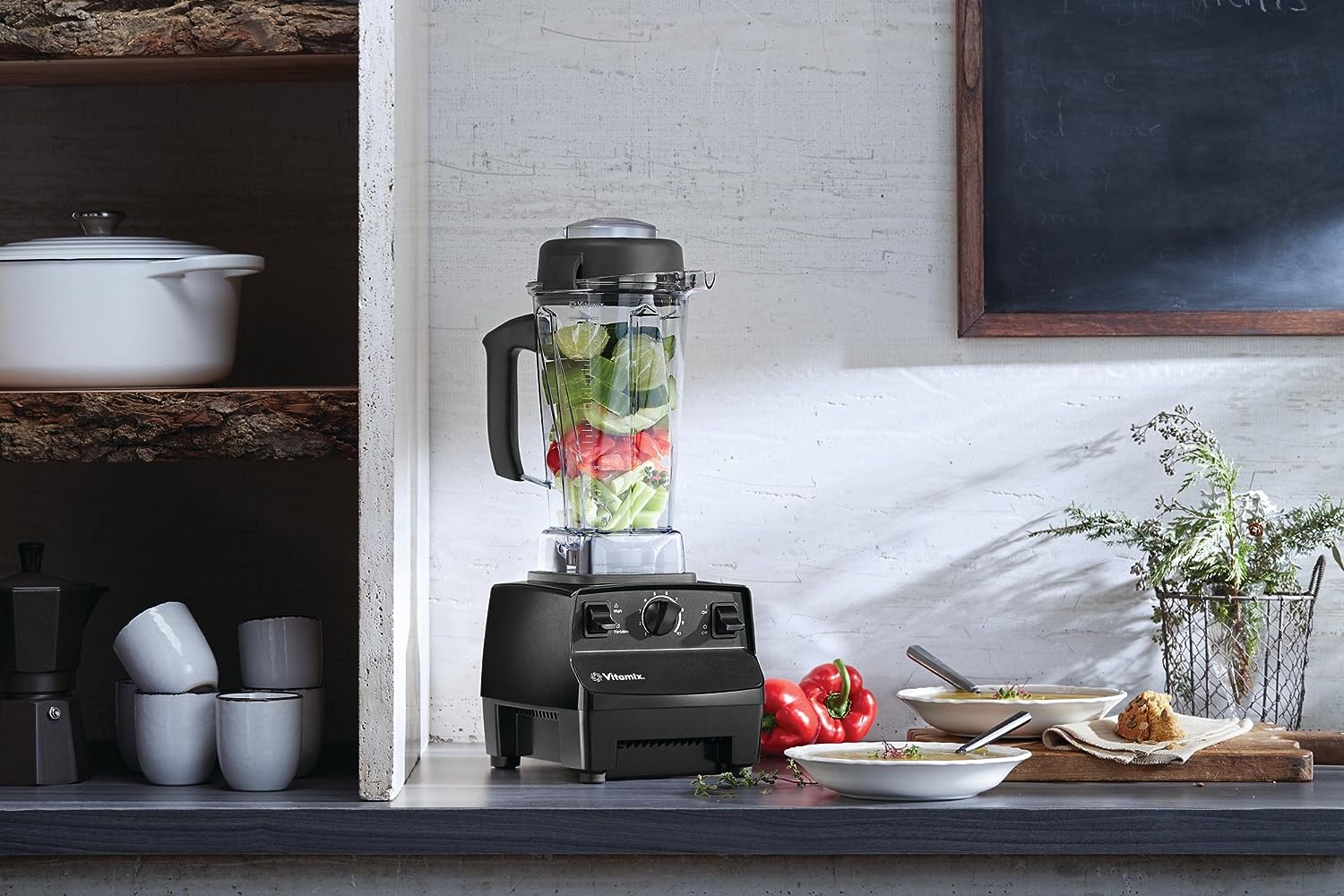 As I’ve divided the article into four parts, let me do the same for the conclusion too.

It’s the Vitamix 750 Blender that shines the brightest. Thanks to the pre-installed settings that save time. But the Vitamix 7500 Blender is a more suitable choice for budget-friendly consumers. Who also want to get their hands on a powerful machine!

The Vitamix 5300 Blender is an upgraded model. Of the Vitamix 5200 Blender. That means the former has extra AND BETTER features. Plus, its low profile makes storage easier. But, obviously, the 5200 model is comparatively cheaper in terms of price.

It’s a tricky business because both have similar features. But the Vitamix 5200 Blender is ideal for daily use. Due to its powerful motor and variable speed options. As for the Vitamix 7500 Blender, it’s got pulse function and lower noise level. Along with smaller counter space!

The Vitamix 7500 Blender features more advanced technology. This means for a tight budget, the Vitamix 5300 Blender is a better choice.

Keep it that simple!

3. Ninja Coffee Bar vs. Keurig (What Is The Best Coffee System?)

5. iComfort vs. Novaform vs. Tempurpedic (What Is The Best Mattress?)

What Is The Best Cut Of Meat For...

How to Choose the Best Organic Coffee? (Complete...

What Is The Best Sewing Machine For Quilting?...

Waterpik Ultra vs. Aquarius (What Is The Best...

Deuter vs. Osprey Aether vs. Atmos (What Is...

Lillebaby Airflow vs. All Seasons vs. Ergo (What...