What’s the first model that comes to mind when buying an embroidery and sewing combination machine? In my head, it’s the Brother SE400. As for the Brother SE600, it’s a more advanced version. And the Brother SE425 is another competitive unit that falls in the same category. This opens the door wide open to the comparison of the Brother SE400 vs. SE425 vs. SE600 reviews.

All three machines are a combination of embroidery and sewing. There’s no denying that. Another irrefutable fact is that the SE400, SE425, and SE600 are great options. Cause the manufacturer is Brother, after all. However, all three might not be suitable for your sewing or embroidery needs and requirements.

The features are not completely the same. You know that, right? I mean there are certain differences. That set each one apart from the other two.

So how about I tell you what these variations are? This way you’ll hopefully be able to decide which Brother creation is right for your projects.

What you see below are individual reviews of both the machines. Following that is the section where I’ve talked about the differences between the two at length. 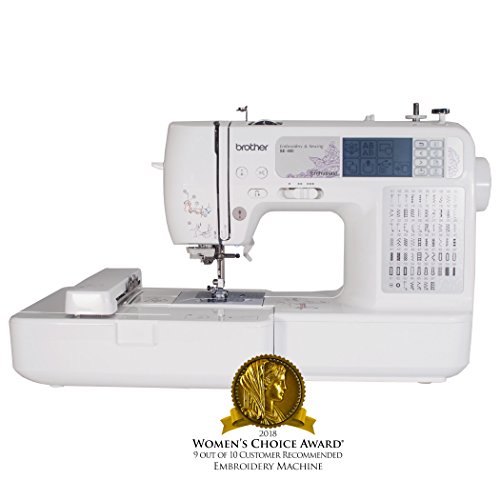 It’s the crème de la crème of sewing plus embroidery machines. The Brother SE400 is created to give your projects a high-end, customized look. Plus, it’s got a relatively less expensive price tag.

With 67 integrated stitches and 70 integrated embroidery designs, this unit is ideal for all kinds of projects. It even offers 5 lettering fonts and 120 pattern combinations.

Computer connectivity is another huge benefit that Brother provides you with. So you can make the most of machine updates. Along with transferring and digitizing embroidery designs!

There are enough convenience features too. Like the backlit LCD touchscreen display and automated needle threader. The top-loading Quick-Set bobbin mechanism makes room for easy winding. And with the push-button style thread cutter, Brother decided to make the experience even more user-friendly.

There’s no doubt about the fact that the SE400 is a feature-rich, affordable choice. Perfect for any type of embroidery or sewing enthusiast! 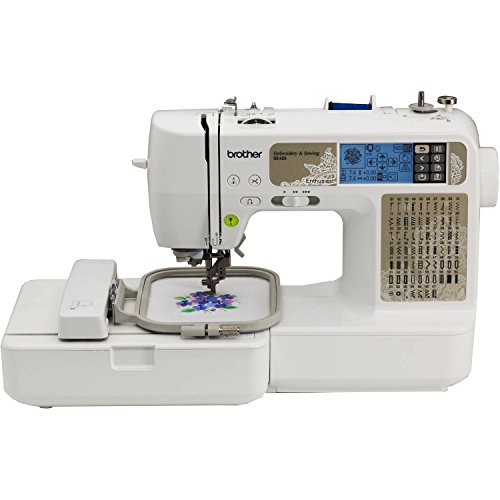 Here’s the second-best option in the comparison of Brother SE400 vs. SE425. It’s the Brother SE425 Sewing and Embroidery Machine. And it’s packed with the same number of integrated sewing stitches (67). But the embroidery designs are higher in number. You get as many as 170 embroidery designs, as opposed to SE400’s 70 designs. Plus, there are 120 pattern combinations and 5 lettering fonts.

The features are pretty much the same. Like the backlit LCD touchscreen display and automated needle threader. With an easy winding system for the bobbin and computer connectivity!

On top of that, you also get access to design editing elements. Such as decreasing and increasing the size, mirror-imaging, and rotating.

Your creative possibilities are endless here. The Brother SE425 offers excellent embroidery capabilities. And the 170 integrated embroidery designs are proof of that.

The truth of the matter here is that both SE400 and SE425 are almost identical. In terms of design and performance!

The list of similar features is longer than the list of differences. So for the sake of comparison, how about I discuss the former first?

Similarities between the Brother SE400 vs. SE425:

Now it’s time to get to know the differences. Even though very few!

Differences between the Brother SE400 vs. SE425: Here’s the one additional advantage of buying Brother SE425. It offers you as many as 170 integrated embroidery designs. 70 of these are pre-installed on the machine. And the remaining 100 are on the CD. As for the SE400, it’s equipped with only 70 on the machine.

So do you like having this kind of an edge? If so, why not opt for the Brother SE425. However, you can always import these designs too. When using the SE400.

The Brother SE425 machine weighs 24.6 pounds. And the Brother SE400 weighs only 10.9 pounds. So which one is more portable? The latter, of course!

Pricing might be an important factor for you. As it is to most people!

You already have access to the Brother SE400 review above. So let’s get to know all about the features of the SE600. 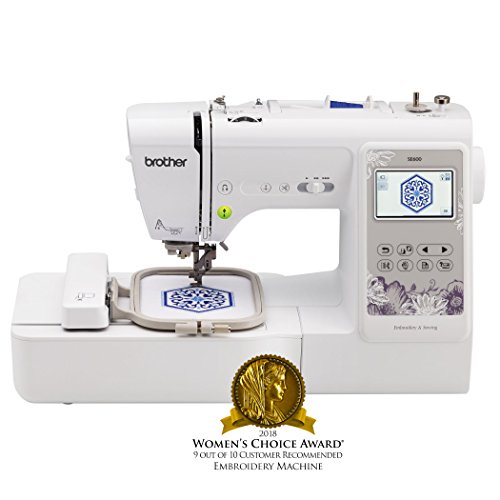 When creativity comes to life, do you know what it looks like? It takes the form of the Brother SE600 Computerized Sewing and Embroidery Machine. Equipped with enhanced technology, this model offers several customizable features. That has the ability to streamline your embroidery and sewing.

You can view your embroidery designs on the large color LCD touchscreen display. It even allows you to preview your edits prior to stitching.

Another important feature here is the expanded design-editing of the embroidery. This feature includes changing thread color, placing the lettering fonts in a curve, and more. You even get to shift the designs on that display. Simply by using a single finger that too!

What’s more is that the SE600 has 80 pre-installed embroidery designs. Along with a USB port that makes way for importing more designs. As for the integrated sewing stitches, there are 103 of them. Plus, the speed control and needle up and down feature. There’s the drop feed component too, which enables free-motion type sewing.

The workspace is larger than the SE400 and SE425 models. 6.4 inches by 4.1 inches, that means enough room for quilting and bulky projects.

Needless to say, Brother SE600 is perfect for your requirements if you tackle professional projects.

In terms of design, there isn’t much similarity. When it comes to comparing the Brother SE400 vs. SE600, differences take control. In the form of USB connectivity, embroidery designs, display screen, and more. So let’s find out everything!

Differences between the Brother SE400 vs. SE600:

How big or small the screen is, plays a huge role as far as convenience goes. In that case, the Brother SE600 offers a larger touchscreen display. On top of that, it’s a colored display.

The SE400 has a smaller screen, comparatively speaking. Plus, there’s no color. So your chances of falling head over heels in love with the color detailing of the SE600 are more likely. Both machines are packed with excellent USB connectivity. This is useful for getting machine updates and importing designs. But differences do exist when it comes to connecting the units.

The Brother SE400 has the Type-B port. In simple words, you require a cable wire for connection. As for the SE600, it has the traditional USB port. That means you can use your USB directly.

So what does this imply? That the Brother SE600 demands only a direct USB connection. Unlike the Brother SE400, which works only via a USB cable.

Now here’s where the Brother SE600 takes a hit. It doesn’t come with a card slot for embroidery. But the SE400 does.

And what about integrated embroidery stitches? One has 80 and the other 70. The former, of course, is the Brother SE600 model. But in the defense of the latter, you’re free to import designs as well. Cause of the USB connectivity, right? Since the SE600 is a higher-end model, it offers more sewing stitches. And that’s 103. This means a larger stitch variety. In comparison to SE400’s 67 stitches!

When it comes to lettering fonts, the SE600 is equipped with 6 of them. 1 more than the Brother SE400.

Not like the Brother SE600 Computerized Sewing and Embroidery Machine. That is 26.2 pounds heavy.

All you have to do is figure out what matters the most? If the budget does, then go for the SE400. If advanced features do, opt for the SE600. Otherwise, pick the SE425 for more access to embroidery designs. It’s really that simple.

1. Best Sewing Machine For Leather And Denim You Need To Buy – Top 10 Choices

4. What Is The Best Embroidery Machine To Use? (Top 5 Reviews)

Playmags vs. Magna-Tiles vs. Picasso Tiles vs. Magformers (What is The Best?)

Yoga Pants vs. Leggings (Comparisons You Need to...

Best Bra for Side Spillage, Side Support You...

Needlepoint vs. Cross Stitch (Differences You Need To...

Best Bra for Sagging Breasts That Will Fit...

Isagenix vs. Shakeology vs. Herbalife vs. Vega One...

Can you use different sized hoops on these models? I noticed they carry a variety on Amazon and the photo for the 425 looks like a larger hoop.